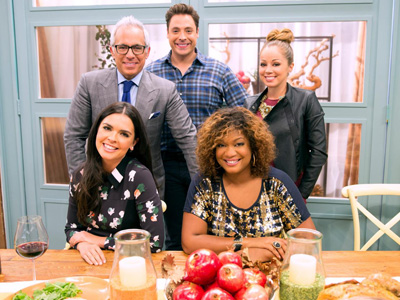 In a post from October 18, 2017, Marcela, sharing little about what really happened, states, “The precise details are unnecessary and, in the words of Ms. Sunny Anderson, nunya business, but there are two things that are very important here, in this departure….” For weeks after her departure there were no real leads on what went down. Suddenly Marcella was just absent from “The Kitchen”.

Marcela Valladolid’s life hasn’t been without drama, even before her departure from the show. Marcela was first married to her husband Fausto Gallardo, a politician. Marcelo and her husband’s relationship were always tumultuous. After splitting for a brief while, she actually re-married her husband in 2012, only to get divorced in 2013. According to a source close to the couple, the main reason for the split was her relationship with Paul Hollywood.

Marcela met Paul on the set of the Great American Bake Off. A short-lived series that was eventually cancelled due to low ratings. Due to this, Marcela wasn’t the only to get separated as Paul divorced his wife of 15-years Alexandra. After her marriage ended, Marcela began dating now husband Phillip Button. Together they have two children, David and Anna Carina.

In that same October 18th post, Valladolid goes on to explain that part of her reasoning for the departure was the strain the travel put on her family. A long resident of San Diego, Marcela is finally moving to Los Angeles to live with Phillip. She also noted that part of her decision came from the fact she wasn’t cooking recipes that represented her. She will most certainly be missed, but you can keep her traditions alive by picking up her book Mexican Made Easy.

Vancouver’s Cin Cin Ristorante is a must visit!