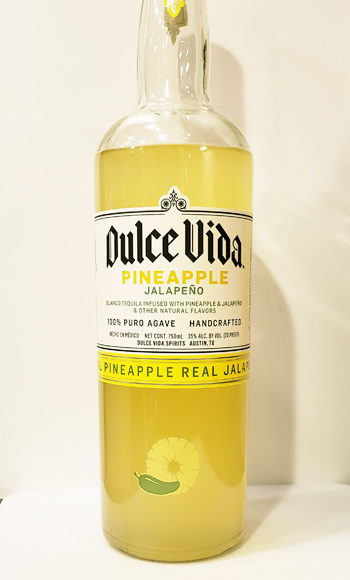 I have always been a fan of sweet things, especially anything pineapple. So, I have become a fan of the pineapple jalapeno margarita. After passing by this bottle at the store several times, I finally broke down and made the purchase.

The first thing I would say is that this flavored tequila is not overly sweet. So, on its on, this might even pass as a tequila you could throw over some ice and drink neat. But, I was determined to find something that would mix well with this. First we tried a pineapple seltzer, but the combination didn’t work that was as I was hoping the seltzer would bring a bit of sweetness to the cocktail.

Next we just tried going with straight pineapple juice mixed with the flavor tequila. Though this was a better balance, the pineapple juice was so sweet that it over-powered the subtle flavors of the tequila. One thing that was probably our favorite, was a tropical juice that wasn’t quite so sweet. But, ultimately your sweet tooth with guide your way. At the end of the day, I would probably just suggest you infuse some tequila with jalapeno and make the cocktail from scratch.

What happened to Mike’s Lite Lemonade?