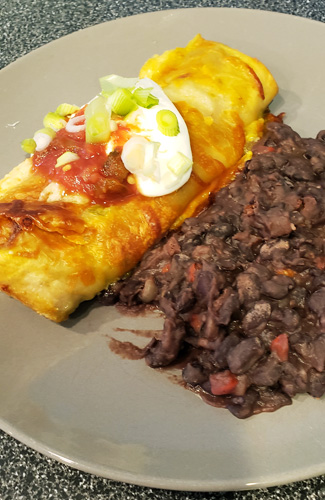 These turned out to be great, but they do take a little time to pull everything together. I also used canned Green Chili Enchilada sauce, as you need the time to create the delicious filling.

First step is to take your cubed Butternut Squash and toss in some olive oil. My grocery store has it again the produce section, but I am seeing it frozen now as well. I also added in a large red pepper in large chunks to roast as well. Season well with salt, pepper, chili power and cayenne pepper than set aside.

Now take one whole white onion and caramelize those down. This process takes quite a while, but as they are close to done, throw your squash and pepper in a 450 degree over until nice and roasted. Once everything has cooled, toss in a bowl with a little green sauces and a cup and 1/2 of mozzarella cheese. At the very end, I toss in one small package of goat cheese than fill the enchiladas. Add Green Sauce on the bottom, layer in your enchiladas than cover with a little green sauce and a little cheddar. Trick tip: Stick they enchiladas in the oven until the cheese just starts to melt. Take out, add another layer of cheddar than cover everything with sauce. Preheat over to 350 degrees.

Bake the enchiladas until the cheese starts to brown, than cover and cook the remaining time. Approximately 30 minutes total. Let cool and serve. I personally might have added more goat cheese in place of some of the mozzarella so that goat cheese really stands out!