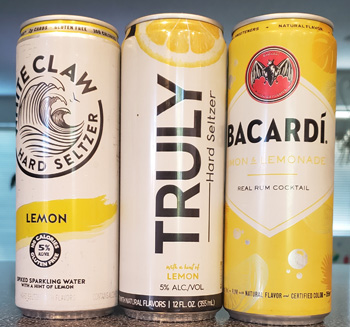 For years, Mikes Hard Lemonade became our favorite line of beverages. Eventually we settled on Mike’s Lite Lemonade as it was healthy. Then the flavored seltzer water trend began and we started mixing them together. But Mikes recently discontinued their Lite version along with many others as they often due with certain flavors in their line up. Now we are forced to find another new favorite beverage in this new world of spiked seltzers and other lower calorie alcoholic beverages. So, we decided to record our journey of experimentation here.

First, lets point out there is a difference between sparkling water and seltzer. I actually wrote a post about it here. But, the lowdown is that sparkling water is naturally carbonated. If carbonation is added later, than its most likely a seltzer or club soda.

White Claw
White Claw is a spiked seltzer. This was the most obvious brand to start with, but with a ton of flavors, we decided to start with the variety pack (lemon, mango, tangerine and watermelon). We really started with this pack because it had a lemon variety. Who knew finding another lemon based drink would be so hard. I think of the four, mango was probably my favorite. The tangerine was especially orange flavored. The watermelon was also good and the lemon on its own didn’t get rated well. However, if you mix the lemon with other things it can be pretty good.

Truly
The next kind we tried was Truly. We also started with their variety back which featured Lime, Orange, Grapefruit and Lemon. I think the flavor of Truly appealed to me much for than the White Claw. White Claw seemed like the flavor was just a little too subtle. So, I decided to expand upon our Truly flavors and bought a different variety pack. This included a Wild Berry flavor which I think is amazing! Then, I also realized the Truly had a Lemonade, but only it was only available in a large 24 oz. can. I see on their site that they have a lemonade 4-pack, but haven’t seen that in any stores yet. The Classic Lemonade got pretty high scores especially when served over a big glass of ice. So, far Truly is in the lead.

Three Birds Hard Seltzer
The next brand we tried out was Three Birds Hard Seltzer. They added in a cucumber flavor to keep themselves original. I don’t mind a jalapeno cucumber tequila beverage, so I was intrigued. The one thing I realized when sampling, is that this particular hard seltzer is a wine-based beverage. If you are not a wine drinker, than this may not be the beverage for you. There is definitely a different texture and taste to this seltzer because it is wine based. Each can is still about 110 calories and 5% alcohol. It’s not quite as sweet as Truly and a bit more like White Claw.

Smirnoff Ice
This beverage is not marketed as a hard seltzer but was the most similar to Mike’s Lite than any other one we came across. I will note here that both the regular and Zero Sugar variety were not my favorites. My other half really like this so I thought it deserved a spot in the post. One thing about the Zero Sugar is it has a very sweet aftertaste maybe a bit of that fake sugar taste. Even when mixed with other things, the taste really stands out.

BonViv
This is actually one of the first brands of spiked seltzer that hit the market. Understanding the alcohol in the seltzer also helps understand the taste and flavor. Bon Viv is made with champagne yeast and not barley or wheat making it gluten free. However, I felt it almost gave it a wine after taste. I only tried some of the more popular flavors. This brand did not make the cut.

Truly Lemonade
For now, I am going to wrap up this post with a reference to my most recent post about the disappearance of Mike’s Hard Lite Lemonade. That is what began our journey to find a new lighter beverage. Not only is Truly’s Lemonade variety the hands down winner, but its plain lemonade version is probably the best replacement we have found.

Please, please comment below. Looking to hear about other’s experiences and favorite flavors!