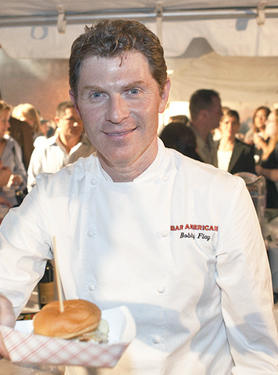 As companies like Netflix and Amazon are courting top TV talent away from broadcast television, Food Network is shoring up its talent agreements. A December 3, 2018 Variety Article,  outlines that deal. It includes new episodes of Flay’s current Food Network series “Beat Bobby Flay,” plus a new series, “The Flay List,” that he will host with his 22-year-old daughter Sophie Flay, scheduled to debut in the spring. The deal also covers Flay’s work as a producer and developer of programs and personalities through his Rock Shrimp production banner.

Flay made his first appearance on a then-fledgling Food Network in 1994 and now ranks as the network’s longest-running active personality. Flay operates numerous restaurants around the country, with his latest venture, Shark, set to open in Las Vegas next year. At present he’s also at work on his 15th cookbook. Food Network is now part of the larger Discovery family of channels. Discovery acquired Scripps Networks Interactive, parent of Food Network, HGTV, Travel Channel and others, for $14.6 billion in March.